How can you work with a client for over a decade and create fresh work?

Close collaboration over many years created a strong relationship and a deep understanding of our client's business, giving us the ability to reflect nuance and their core values using new and dynamic visuals year after year.

An annual report program that is as varied as the energy business, yet highly strategic and deeply human.

Show, don’t tell, is the advice of great editors. Our 12+ year relationship with New Jersey Resources, the energy utility serving Ocean, Monmouth, Middlesex and Morris Counties is an example of how to create the story of a corporation that resonates with humanity.

Why would a gas company invest in this type of narrative tool? New Jersey Resources is a lifeline services company that touches ordinary people’s lives every day for their essential needs; keeping people warm in the winter, as well as providing gas for cooking and home appliances. People who work for the company live locally and are customers. Investors also are often customers who view utility stocks as safe investments. Public utilities have an intimacy with families that is unlike other businesses.

An annual report program that is as varied as the energy business, yet highly strategic and deeply human.

Utilities are also heavily regulated industries. Rate increases, infrastructure improvements and numerous other business initiatives are dependent upon government approval. While some sectors of the business community have eliminated the annual report, New Jersey Resources has embraced it as a key component in their communication strategy to customers, shareholders, employees and regulators.

Over the years we have created a variety of compelling photographic essays on topics such as recent events, employee engagement and conservation. These stories resonate with humanity. 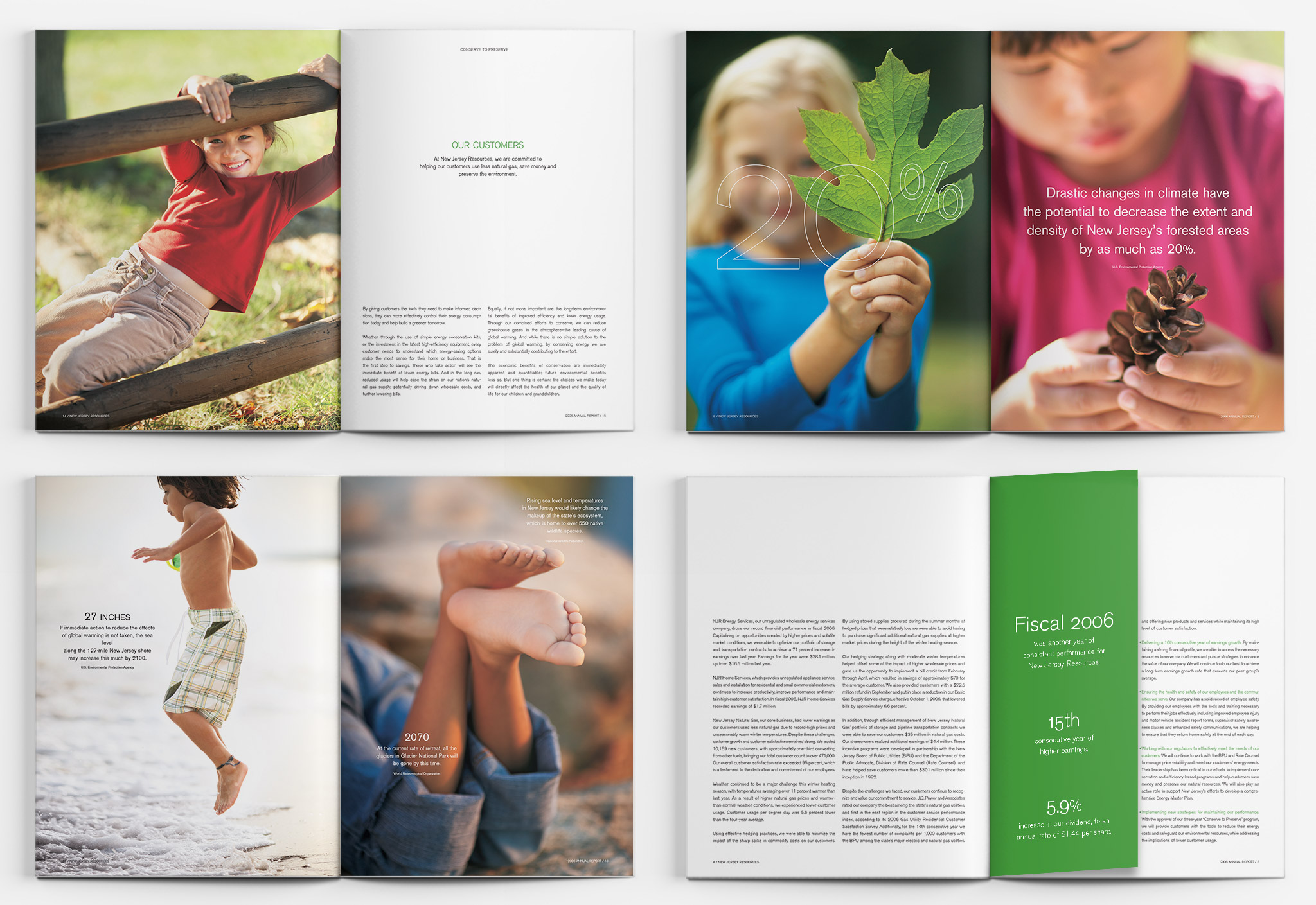 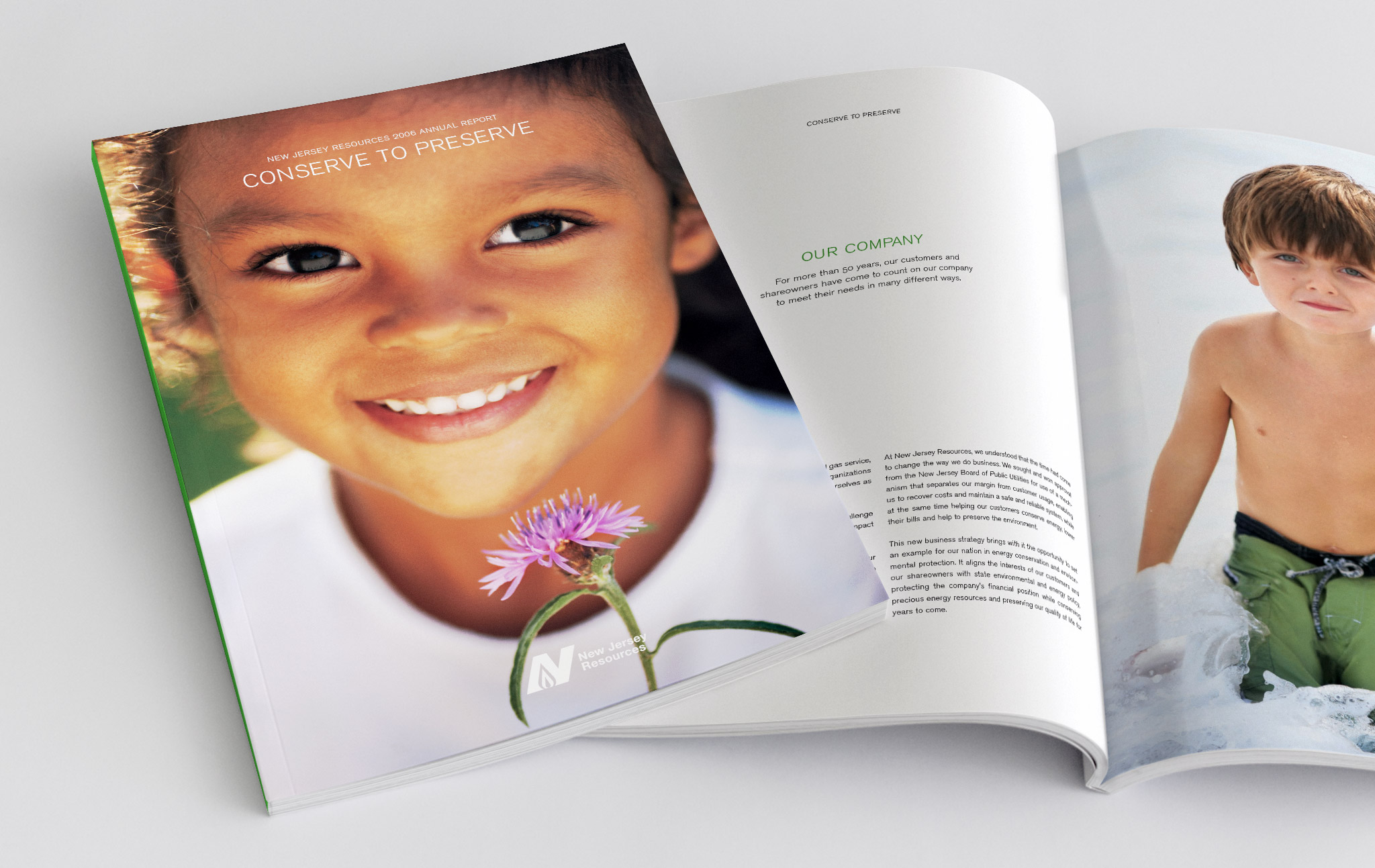 Conserve to Preserve: Innovating through regulation
NJR is a visionary organization that is able to meet the challenges of climate change because of a future-focused management team that embraces innovation. In 2006, recognizing the threat of global warming, it began an unprecedented initiative to lower energy use by its customers. Lower usage, you might ask? Isn’t that how a utility makes money? Perhaps in the past, not necessarily in the future, answered the company.

We simplified and focused the core message for consumers and shareholders: this was to benefit future generations.

In coordination with the New Jersey Board of Public Utilities, NJR launched Conserve to Preserve initially as a pilot program, designed to decouple the utility’s stock performance from the consumption of energy if customers met specified conservation targets. Although the structure of the program was complex, we simplified and focused the core message for consumers and shareholders: this was to benefit future generations. For four years we emphasized different impacts of the program, including environmental stewardship, community and shareowner benefits. 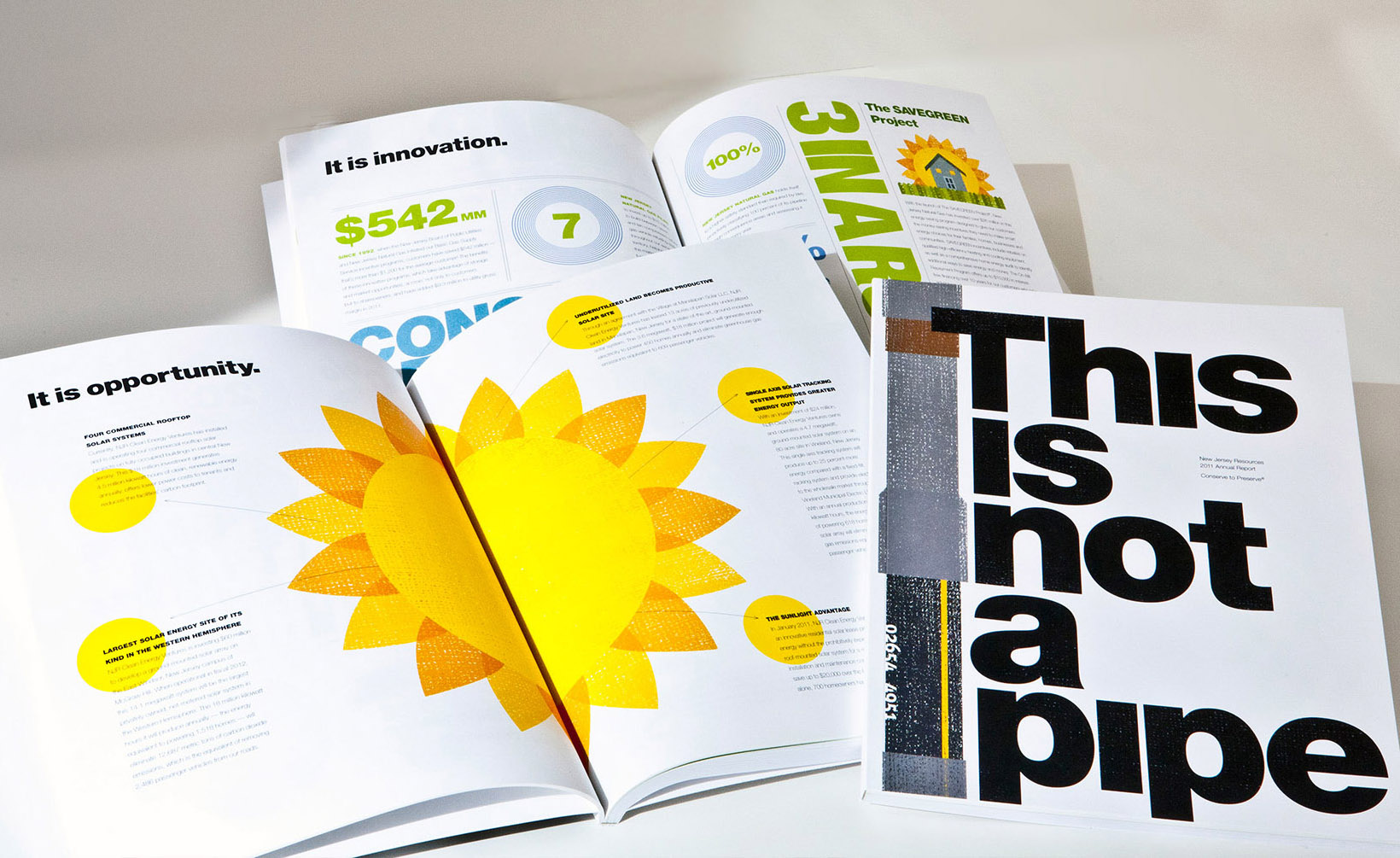 Infrastructure: Using metaphor to bring industry to life
Infrastructure is the lifeblood of a utility—it’s how energy is delivered to customers. There were several times when our mission was to communicate the vital importance of this aspect of the business. In 2011 we were inspired by the name of a painting by surrealist Rene Magritte—“Ceci n’est pas une pipe” French for “This is not a pipe.” “This is not a pipe,” became a narrative device to illustrate how the gas pipes in the ground represented more than their prosaic function; we demonstrated the importance and the return on investment of infrastructure to shareowners through a series of engaging infographics. In 2015, infrastructure was again an important part of the narrative. We treated everything from wind farms to liquid natural gas facilities as fine art with pops of neon color to call out important performance data. 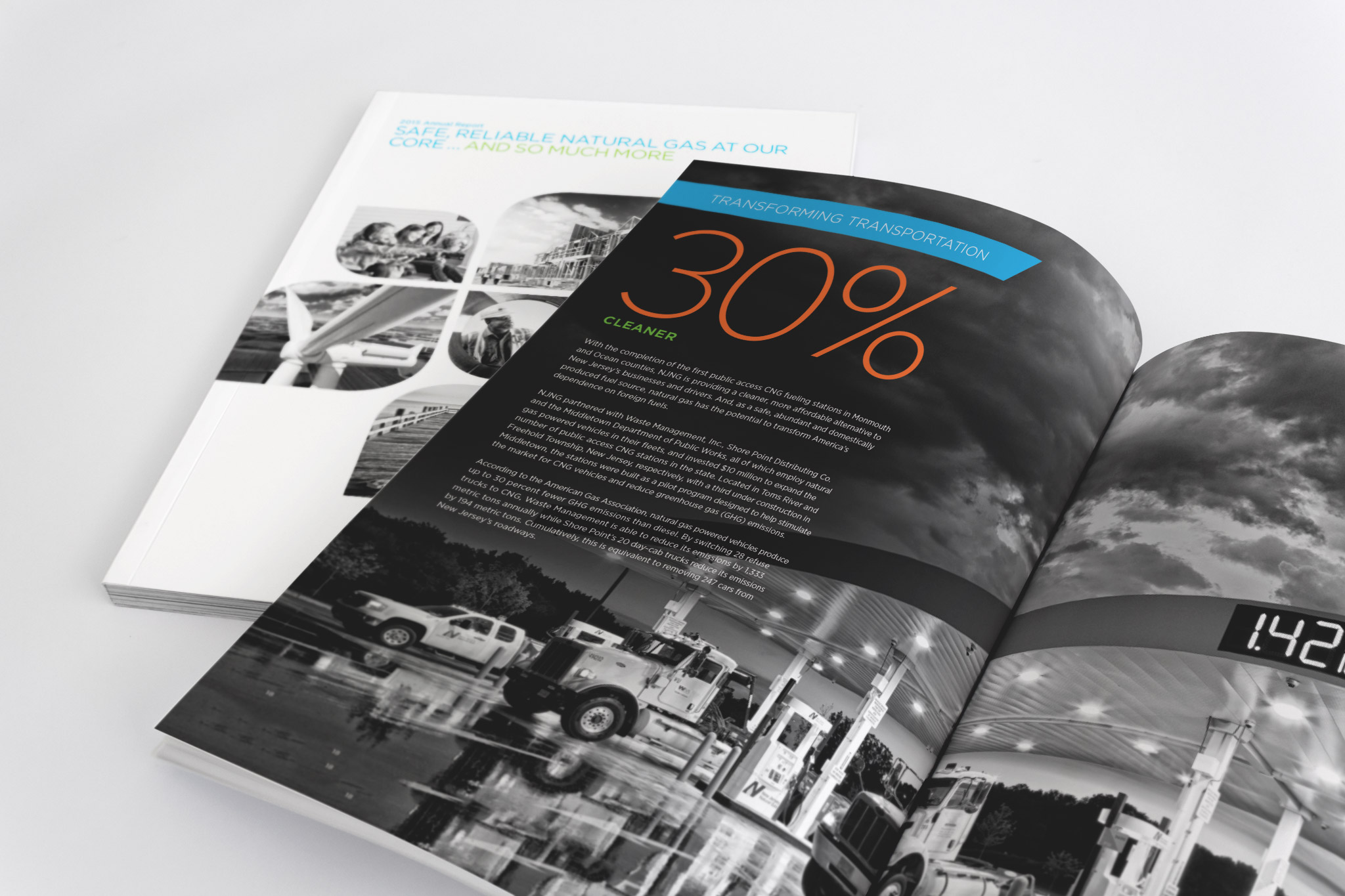 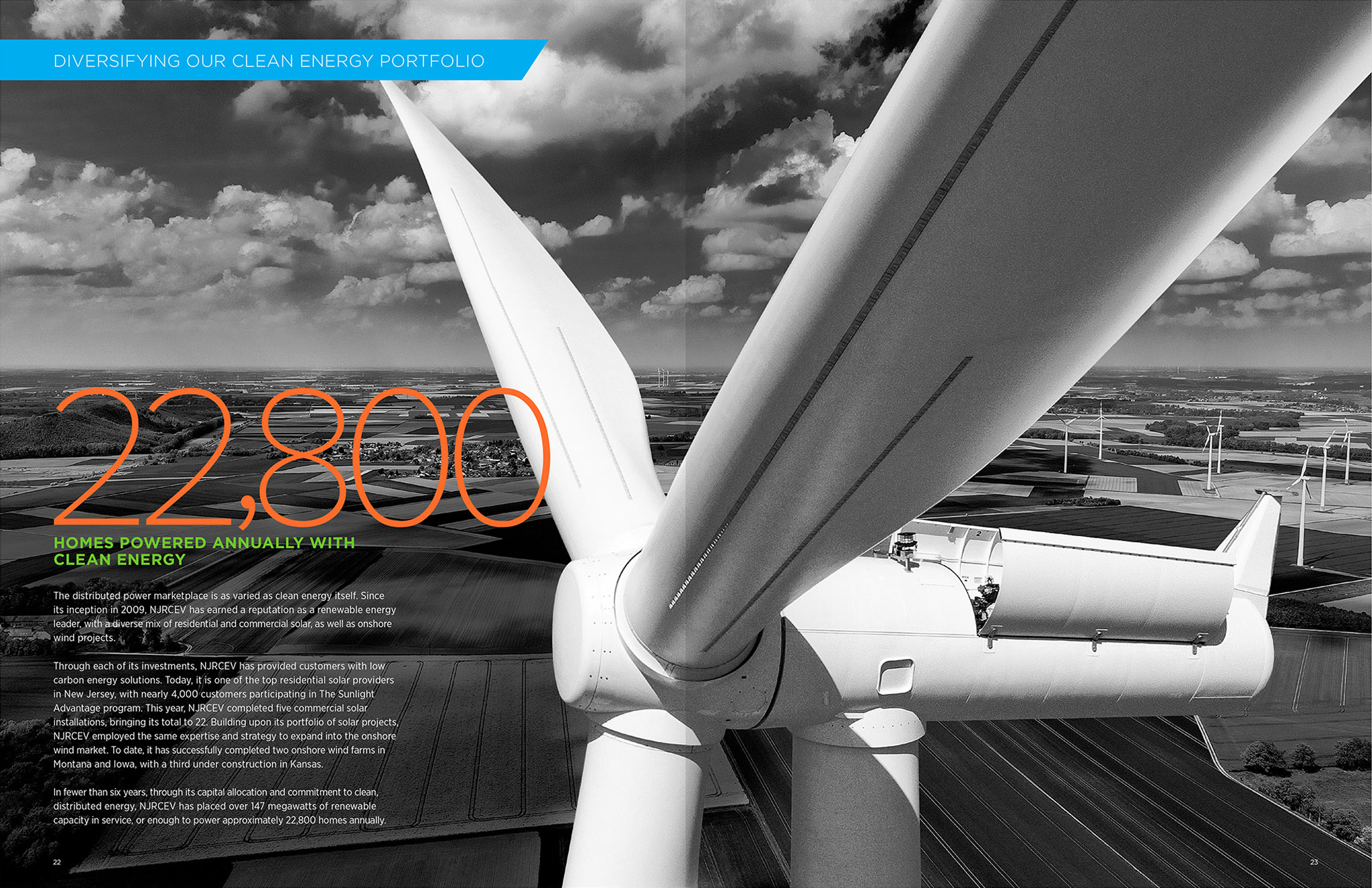 “This is not a pipe,” became a narrative device to illustrate how the gas pipes in the ground represented more than their prosaic function. 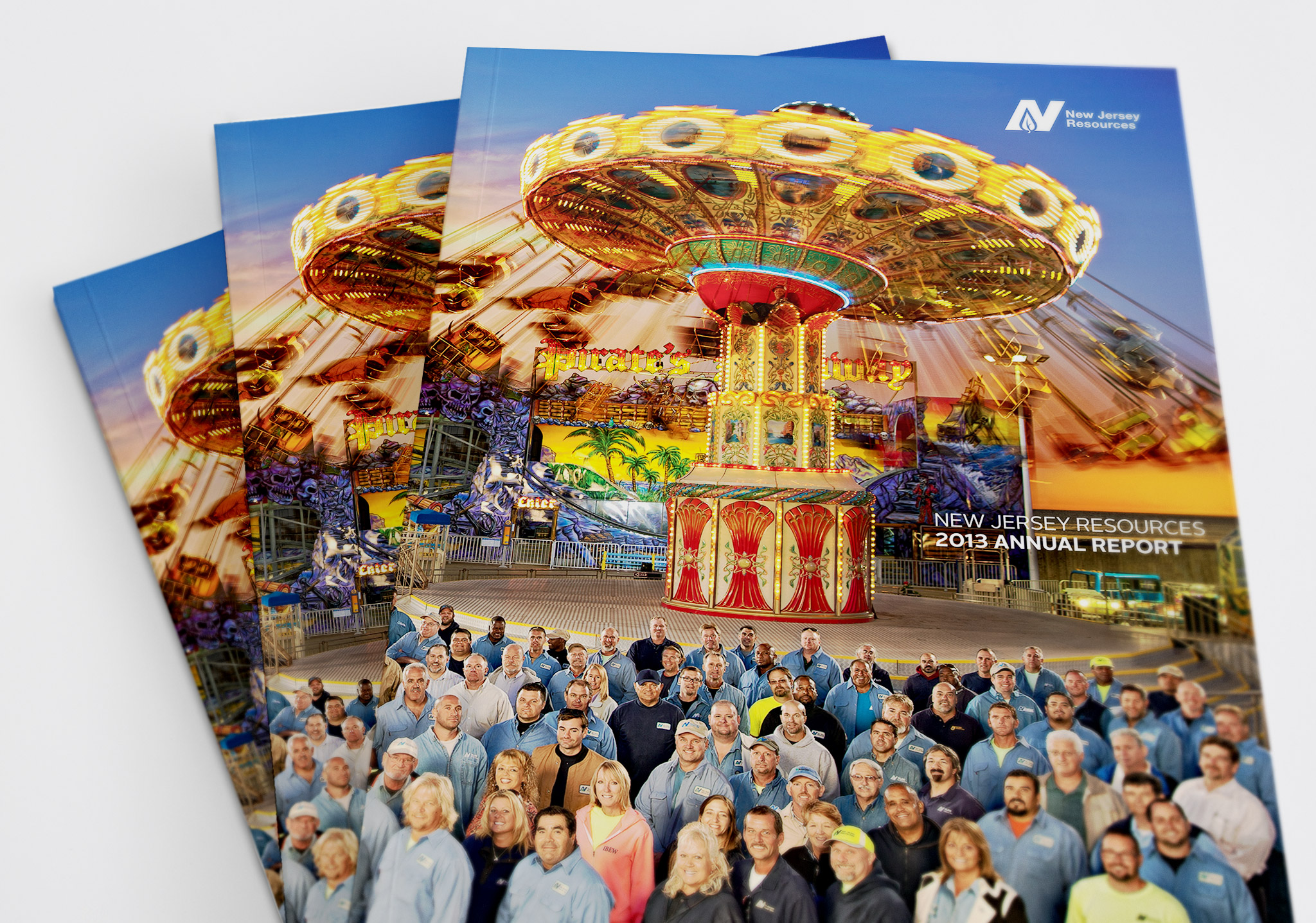 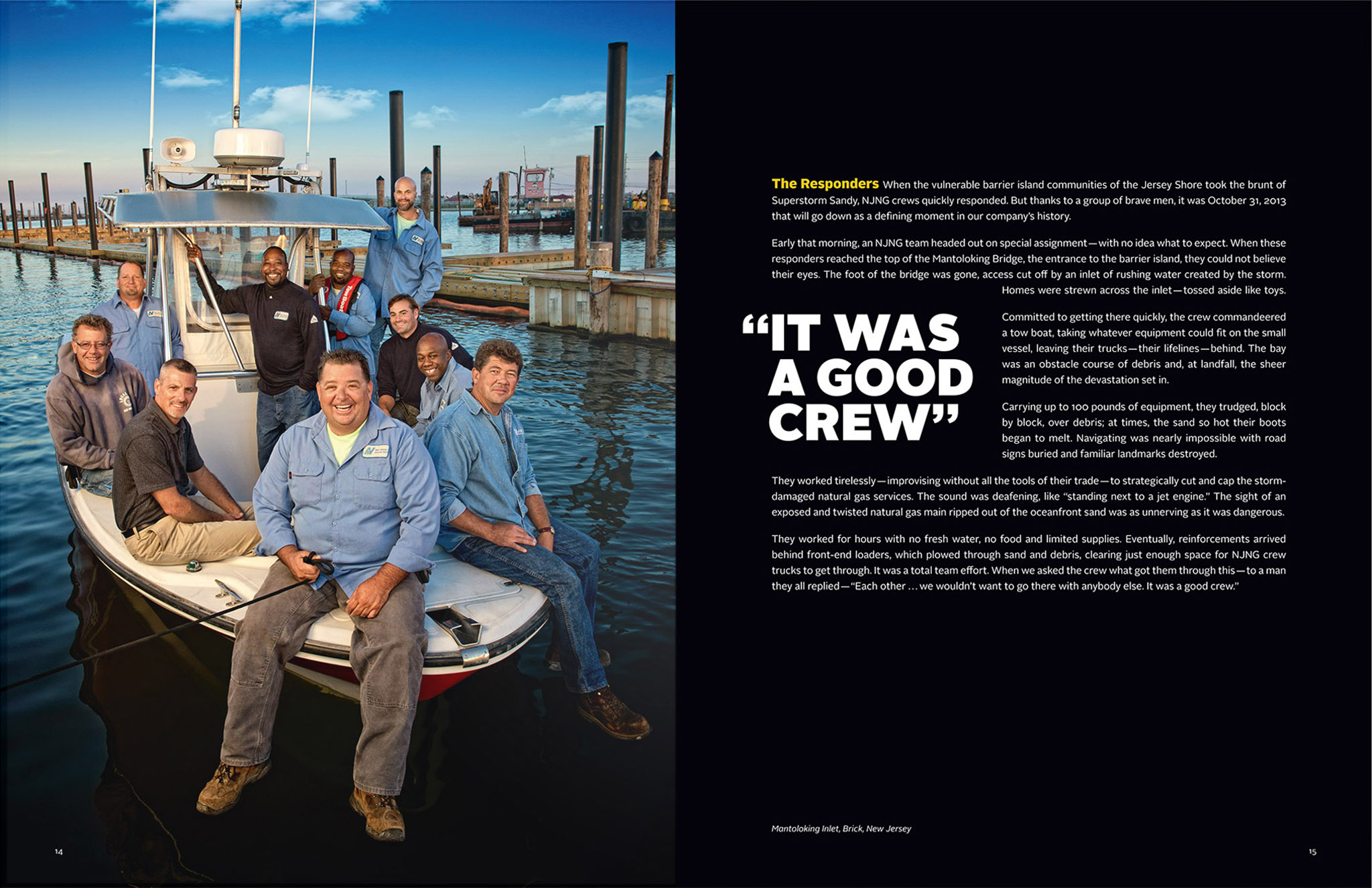 Superstorm Sandy: A story of heroic effort
The 2013 narrative addressed the heroic and extraordinary performance of the company’s employees who had to contend with unimaginable devastation in the wake of Superstorm Sandy. The storm created challenges beyond comprehension: communities were under water, a new inlet was created, boardwalks washed out to sea, and major roads were buried under six feet of sand and debris. Gas service had to be curtailed in the hardest hit areas. The report tells the stories of the courageous teams that went out in the early hours, supported by hundreds of others at the company’s offices, who left their own families to serve the community and ensure safety. 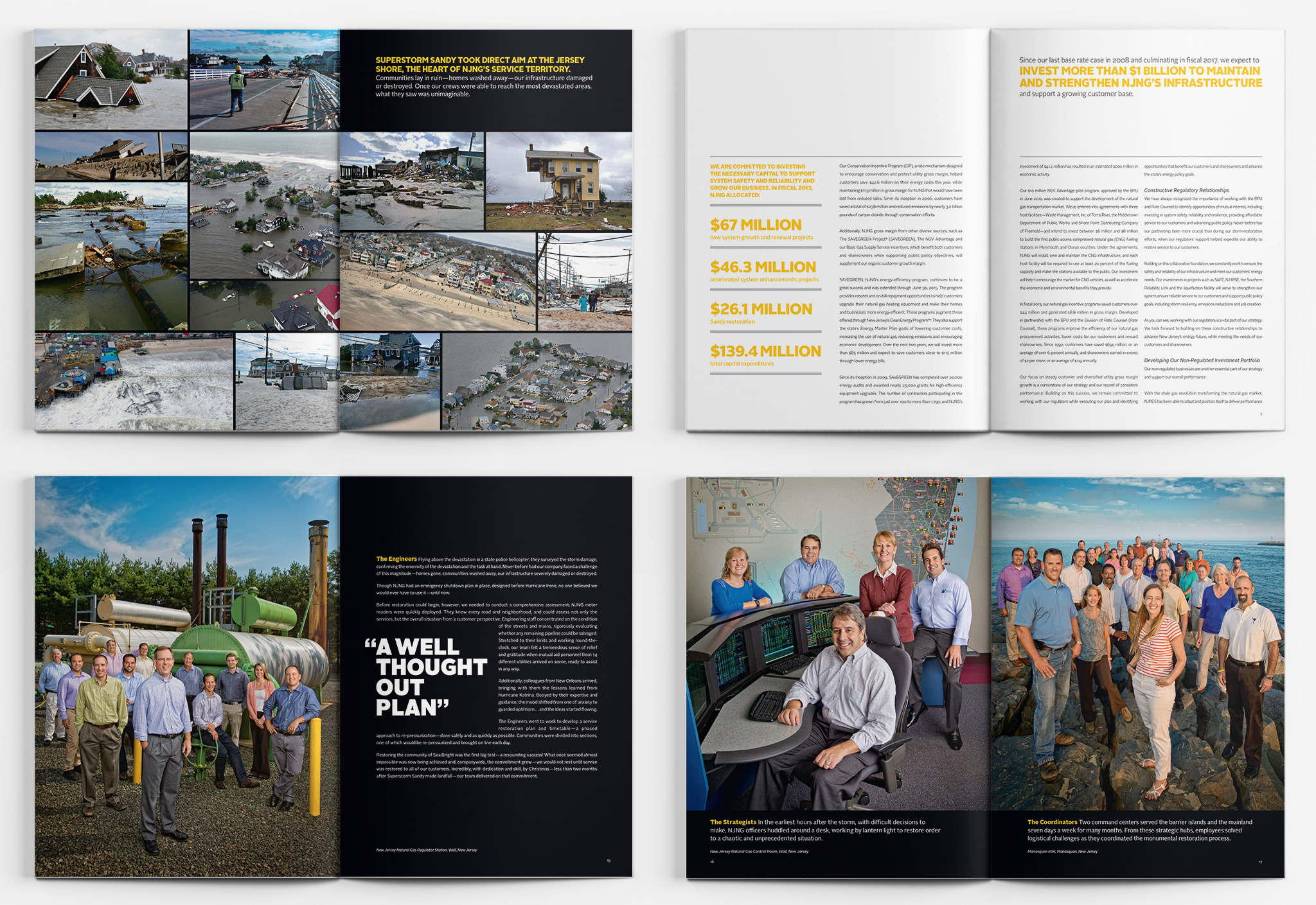 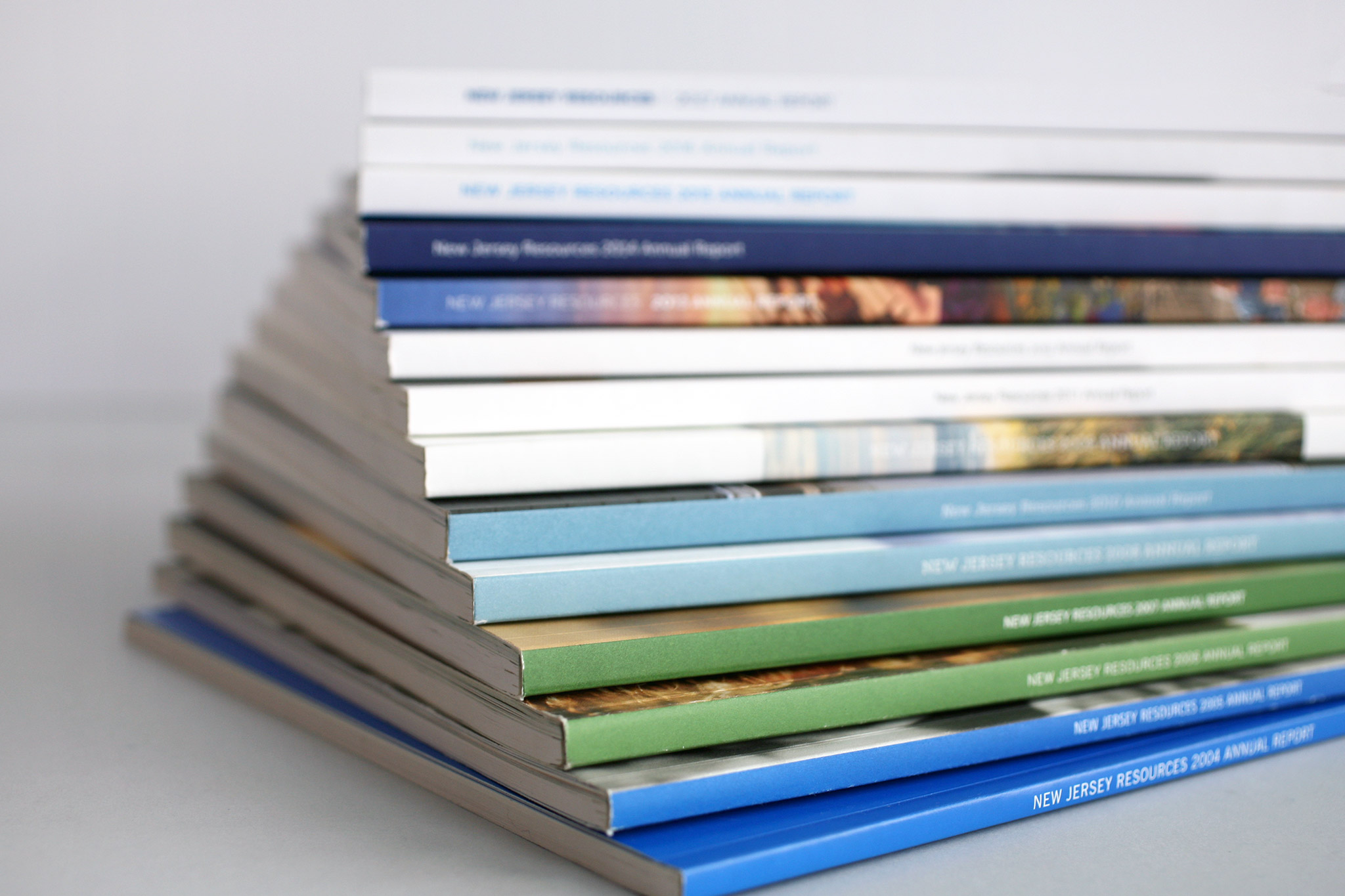