Brand Appeal for the Next Generation

White & Case’s goal was to be an employer of choice among the highest performing law students. Decker was engaged to help the firm achieve this goal.

After a lengthy discovery, we found that current associates loved the firm. They cited all of the qualities our prospective audience was seeking in an employer. Our recommendation was to allow the associates to speak in their own words about life at the firm.

The program was amazingly successful and the firm received more than four times the response from the prior year and was able to create a summer associate class from the best candidates. 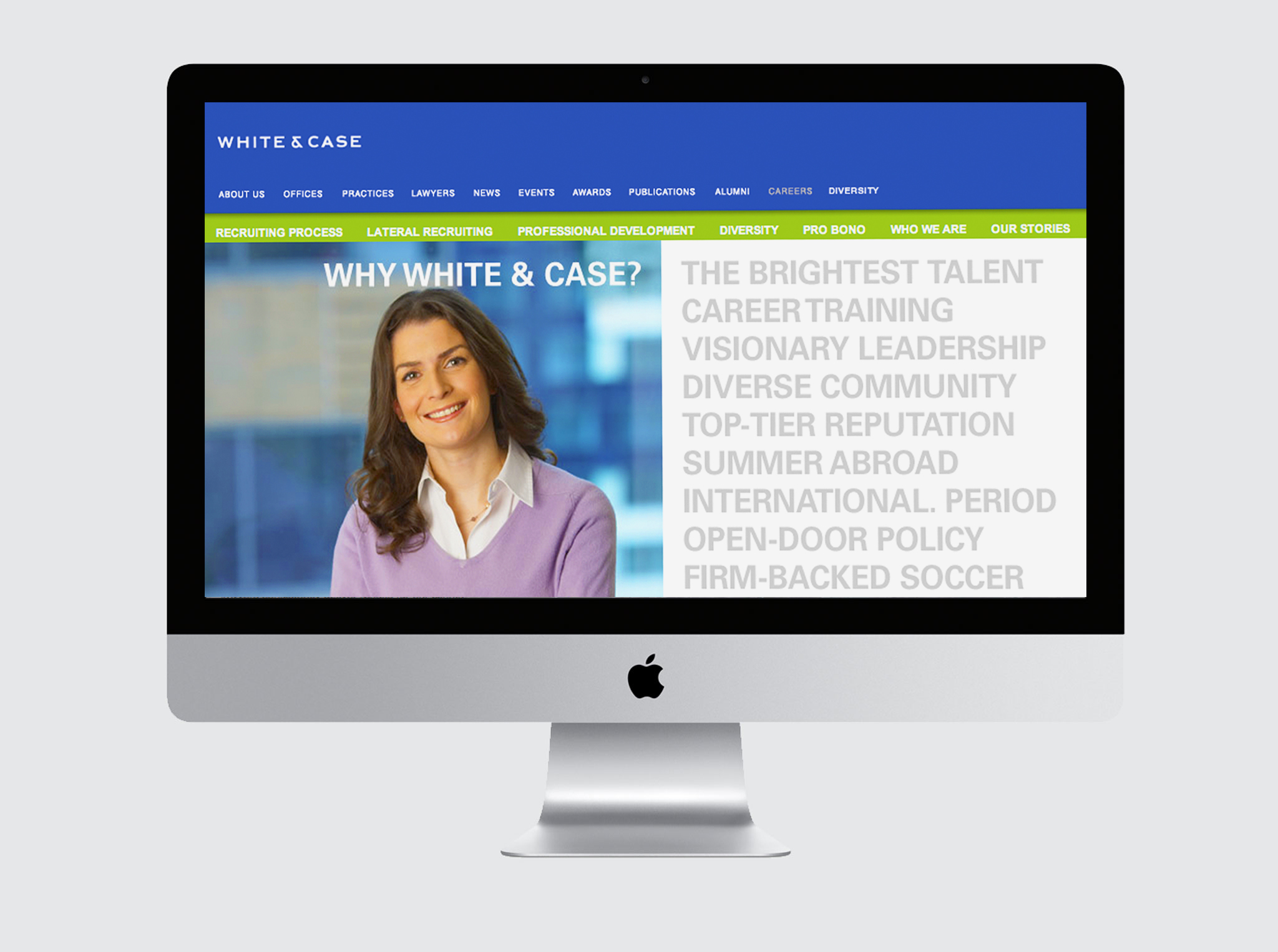 A member of the Am Law 100, White & Case is a global partnership founded in 1901 to service the banking industry. Over the decades the firm diversified and then had the foresight to expand in Eastern Europe after the fall of communism in 1989. They led industrial privatization of the former Soviet Union through the later part of the 20th century.

We were contacted to redesign the firm’s recruiting program, which was expected to include a microsite and a series of printed collateral material. A study conducted by McKinsey had been commissioned prior to our engagement and provided foundational research. It told us second year law students perceived White & Case as lacking diversity, access to mentorship and work/life balance. This perception was due in large part to comments on web sites that rated associate experiences.

The recruitment launch was so successful that a year later, White & Case hired us for several more assignments.

The McKinsey study provided us with a wealth of information. We set out to amplify the quantitative data with qualitative research and we quickly identified some gaps. So while external impressions might have revealed high negatives, internal perceptions were totally opposite. A series of interviews with the firm’s current associates told they were, in fact, very satisfied and especially thrilled with the firm’s international presence and opportunities for travel. This additional information proved to be critical to the project’s success.

To further amplify the research, our team conducted an extensive competitive review as well. Some law firms, especially those located in Silicon Valley, implemented microsites that were very playful, with animations, color, music and irreverent language. Yet there were other firms that were almost solemn in their approach. Neither direction would meet our objective to demonstrate that White & Case is a firm filled with intelligent and engaging people. 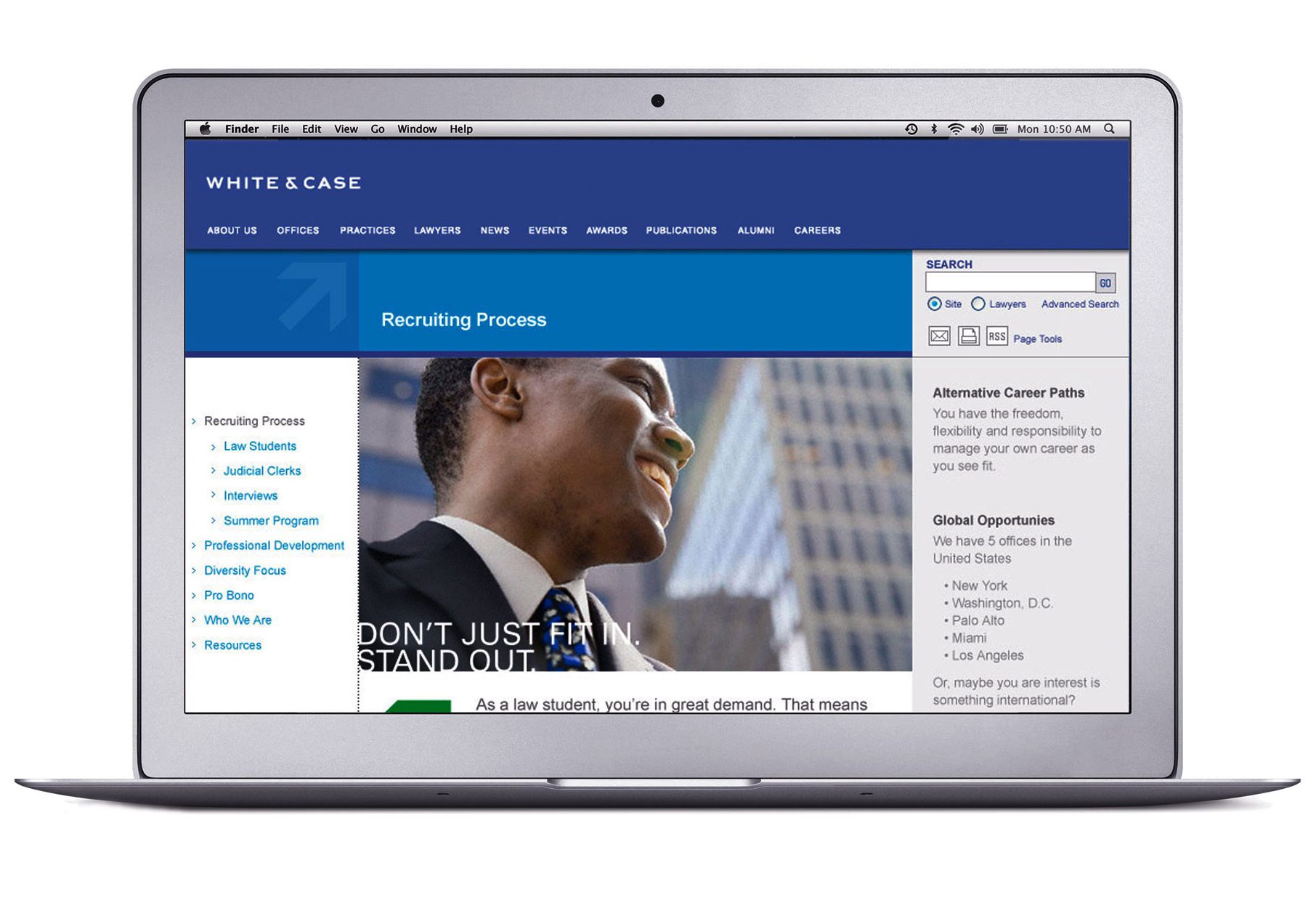 The Discovery Phase really set the direction for the content strategy, information architecture, and the visual approach.

The Discovery Phase really set the direction for the content strategy, information architecture, and the visual approach. Our recommendations on content strategy necessitated new copy for both the website and all of the print collateral. Our goal was to be clear, concise and honest. Day-lit photography felt open and authentic; call outs, quotes and quick tips for interviews added visual and verbal texture to the pages. 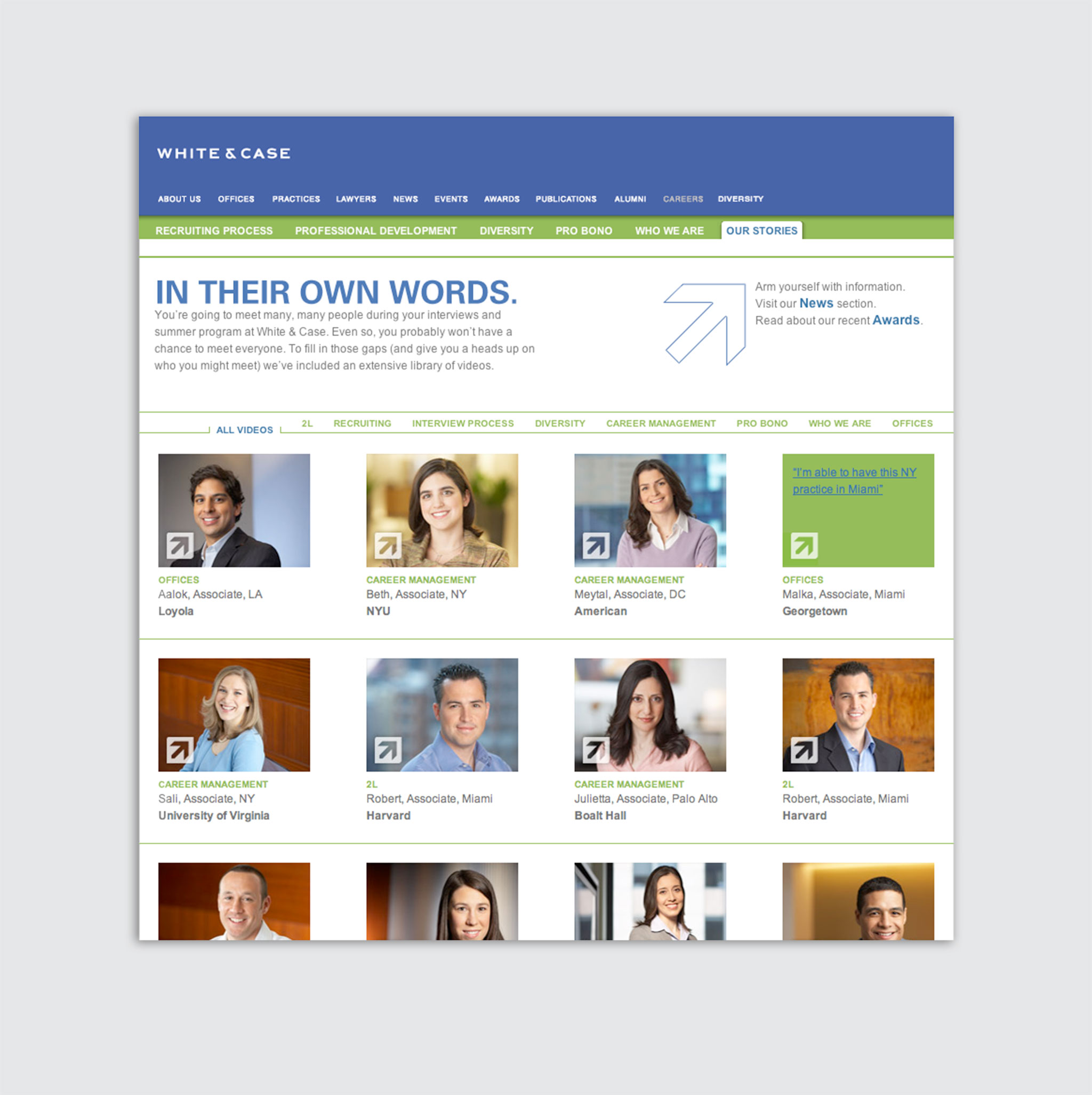 We wanted to demonstrate empathy for the audience. Choosing one’s summer associate assignment launches a career path, and bears great importance. It is a stressful time for students who have student loan debt and worry about making the wrong decision. Our recruiting solution had to be honest and authentically relate to the needs of these prospects—so we asked the associates to speak on camera and relay their experiences. We created a library of over 70 short videos that supported and amplified the numerous reasons to work at White & Case: The brightest talent, career training, visionary leadership, diversity, reputation, summer abroad and international period. And did we forget, firm backed soccer. Not only did the clips resonate with students, but they were also meaningful to parents, who were often involved in their son or daughter’s decision.

The recruitment launch was so successful that a year later, White & Case hired us for several more assignments. We created a new partner video for their annual meeting, and a global website strategy. 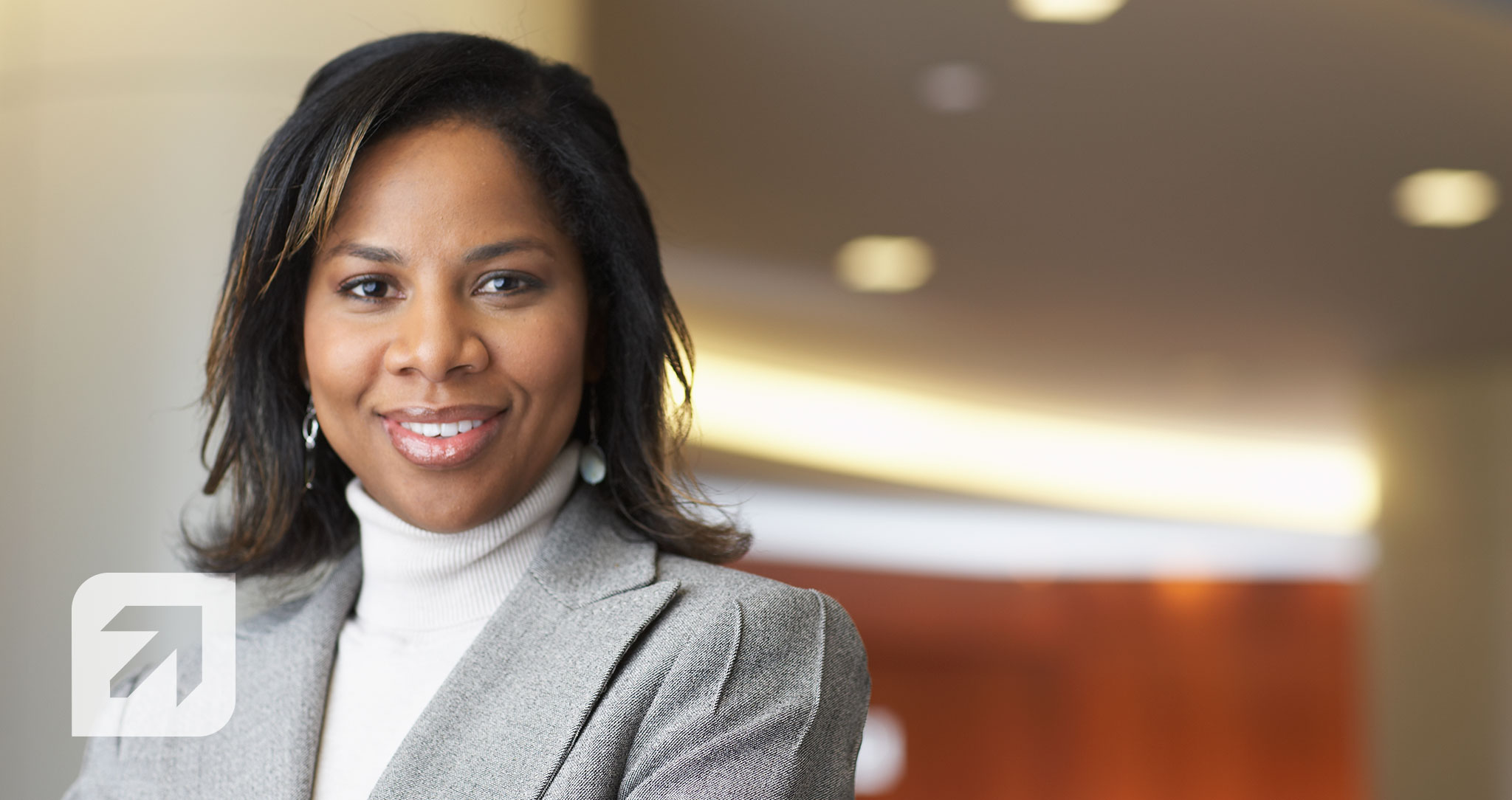 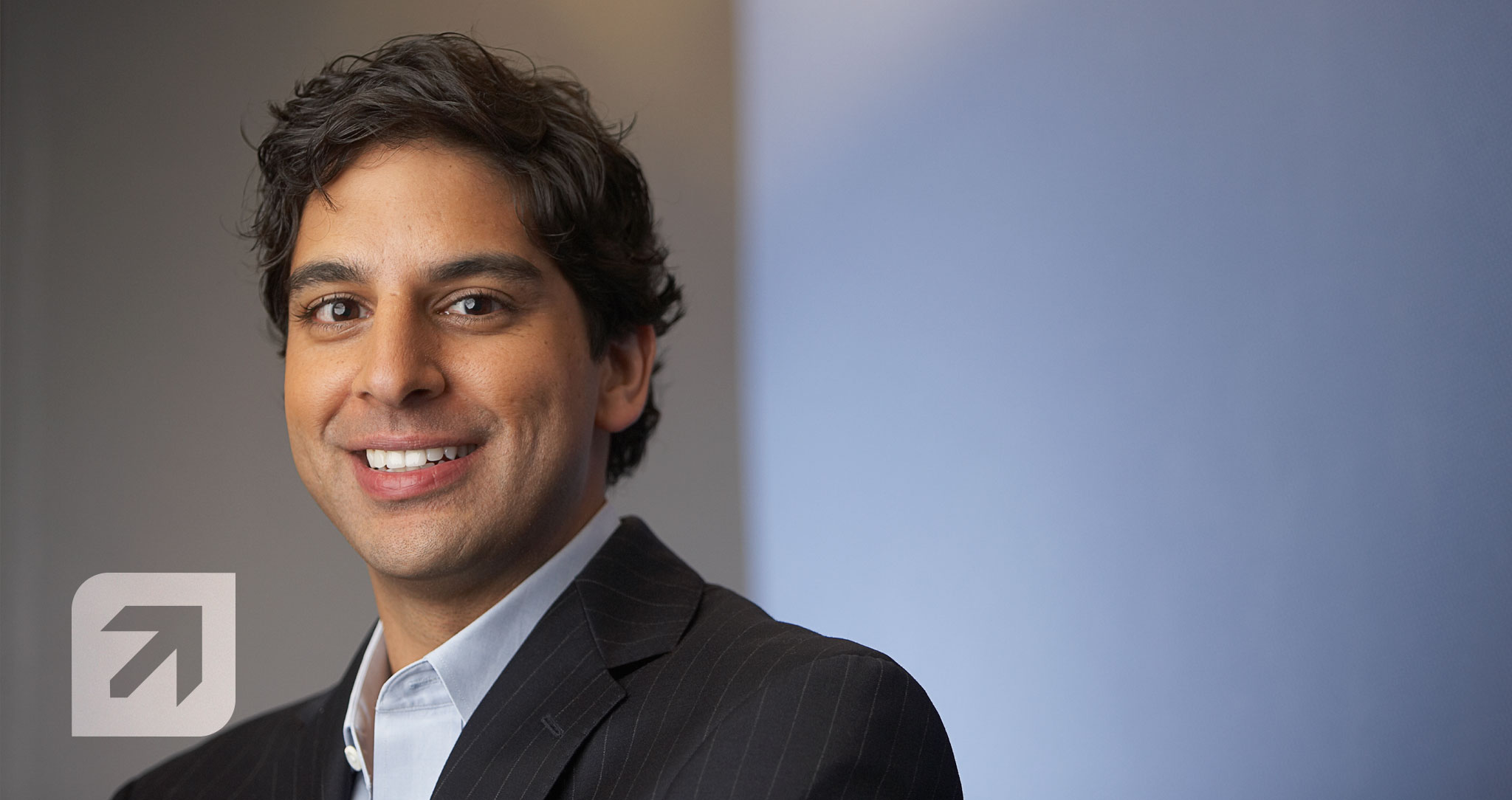 A four times increase in responses from past years

Doubled the engagement time on the microsite